Only a change of government will deliver fair funding for public schools.

Prime minister Scott Morrison has failed the fairness test by refusing to reverse the Coalition’s $14 billion in cuts to public schools.

AEU federal president Correna Haythorpe says the federal budget was the prime minister’s chance to reverse his six years of attacks on public schools, but he chose not to.

“The prime minister is not giving public schools a fair go, so it’s time for him to go,” she says.

“There’s no option. If we want to stop cuts to public education funding while private schools receive special funding deals, if we want to properly support students with disabilities and Aboriginal and Torres Strait Islander students, then we need to change the government.’

The AEU’s Fair Funding Now! campaign is playing a vital role in reminding voters and politicians of the inequities in our education system and what’s needed to create a fair go for all students.

A fleet of Fair Funding Now! vans visited schools across the country in the lead up to the federal budget with campaign teams talking to educators and parents about what they want for their kids in public schools. The vans converged on Canberra for budget day and supporters planted thousands of cardboard ‘schools’ in the Parliament House lawns. It was a powerful display of how much each individual school is missing out on because of Scott Morrison's $14 billion of cuts and how much extra funding they'll receive under a change of government.

Many Labor and Greens MPs visited the display with Labor’s Bill Shorten, Tanya Plibersek and the Greens Richard Di Natale using it as an opportunity to remind the public of the sharp divide in education policy in this election. 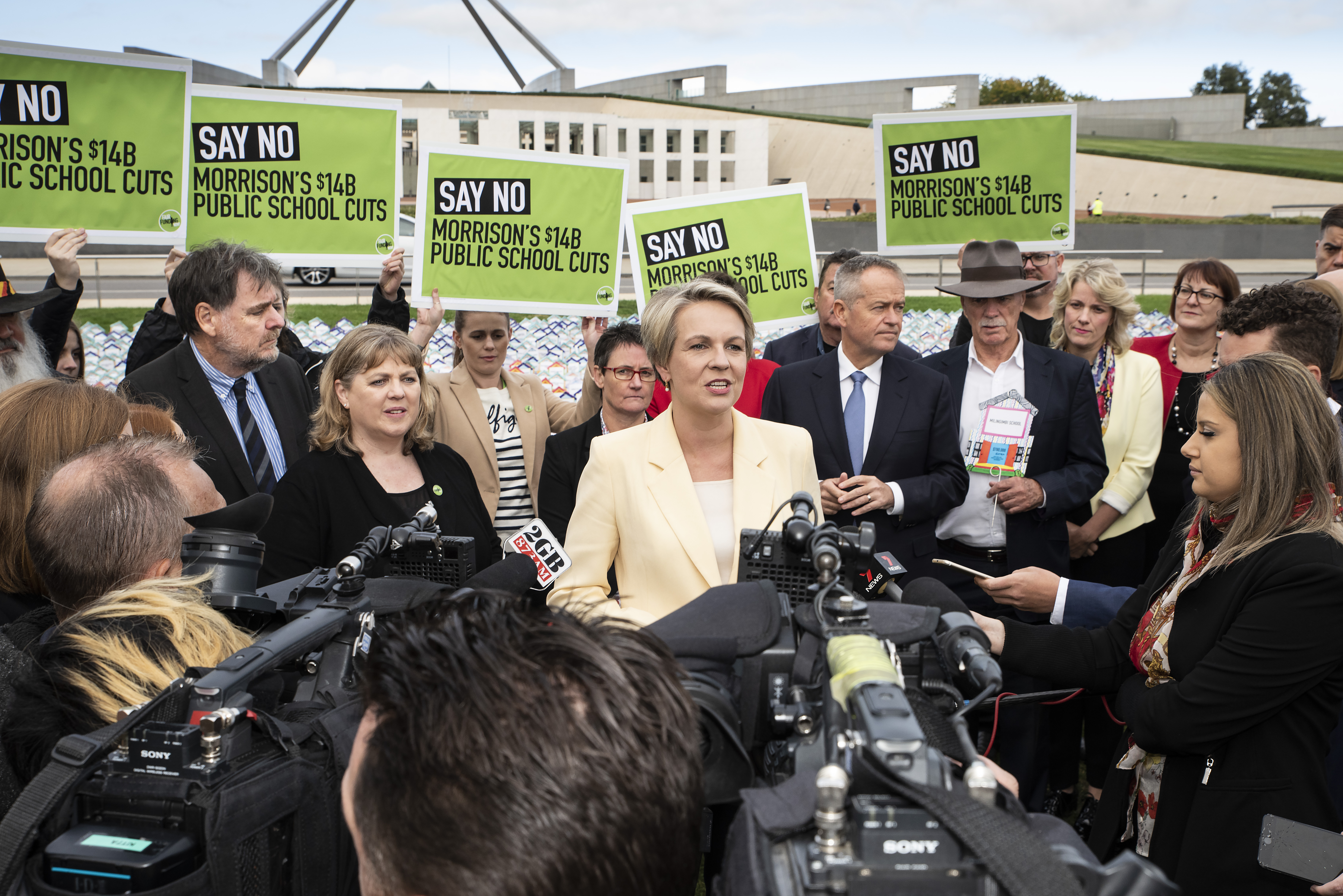 The Morrison government has cut $14 billion from public schools while favouring private schools with special deals worth billions.

Labor promises to restore Scott Morrison’s funding cuts for schools, providing $14.1 billion over the next decade including $3.3 billion in the first three years.

The Greens have also promised extra funding: $24.5 billion over four years plus $320 million earmarked for capital works in public schools.

The Coalition has used its term in office to chip away at Australia’s public education system, effectively throwing out the recommendations of the Gonski review. School budgets were cut by $1.9 billion in 2018 and 2019.

While the Morrison government claims it’s providing “record levels” of funding, Save Our Schools convenor Trevor Cobbold says there’s little prospect that public schools will be adequately funded over the next decade.

Cobbold points to bilateral funding agreements the federal government signed with state and territory governments that effectively lock in public school disadvantage. Under the agreements, public schools will only ever be funded at 91 per cent of the Schooling Resource Standard (SRS) “at best”, while private schools are guaranteed 100 per cent of the standard or more by 2023, he says. The Coalition has kicked in a further $4.6 billion for private schools to quell their disquiet over the Gonski review’s recommendations for a fairer and more equal schools funding model, plus $1.9 billion to boost their capital works programs.

Haythorpe has accused the Morrison government of coercing the states and territories into signing the bilateral agreements by threatening to withhold funding if they refused. As a result, she says, only 1.3 per cent of public schools will reach 100 per cent of the SRS by 2023.

“The claim of record funding is nothing more than political spin. The reality is that the Coalition has overseen record school funding cuts.” – Correna Haythorpe, AEU federal president

“The claim of record funding is nothing more than political spin,” she says.

“It’s not simply a case of more funding, it’s about fair funding. All schools must be funded to 100 per cent of the SRS to prevent inequality becoming further entrenched and to stop public school kids missing out.”

Indefinite underfunding of public schools perpetuates disadvantage and is a “huge cost” to individuals, society and the economy, says Cobbold.

Overwhelmingly, voters want a government prepared to invest in public schools, not one that cuts funding and makes it harder for the children who need the most help. With Labor’s pledge to restore the cuts and ensure that public education is at the heart of their government if elected, the facts are clear. If Scott Morrison wins, our children and their schools lose.

Labor’s shadow education minister Tanya Plibersek says the Schooling Resource Standard (SRS), which was introduced when Labor was in government, is an objective measure of the cost of properly educating a student. Plibersek calls it the ‘Fair Funding Level’ because it includes loadings for factors such as socio-economic status, remoteness, size of the school, number of Aboriginal and Torres Strait Islander students, disability and English language proficiency. 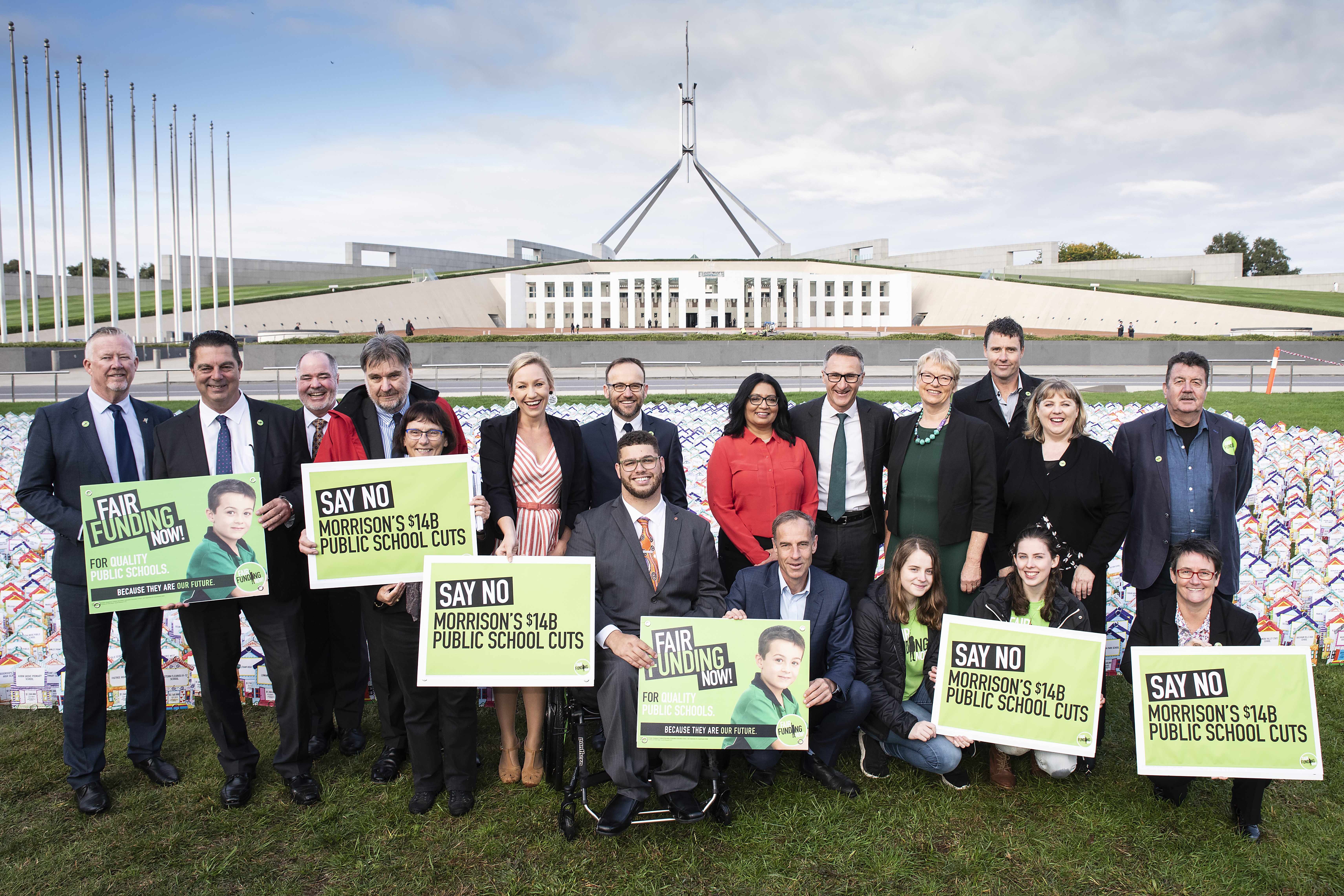 Labor is committed to improving support and resources for students with a disability and their teachers. An extra $300 million will be added to the disability loading between 2020 and 2023 to ensure schools have the resources to teach every child.

“This increased disability loading will help students get specialised teaching and support, pay for necessary equipment and alterations to school facilities and provide access to modern technologies that enable learning,” says Plibersek. The Greens is also committed to reversing Morrison’s cuts to funding for students with disability.

Join our campaign for Fair Funding Now! at fairfundingnow.com.au.