Part 5. Educators, parents and community supporters across Australia are working tirelessly on the Fair Funding Now! campaign. Five activists tell us what drives them. 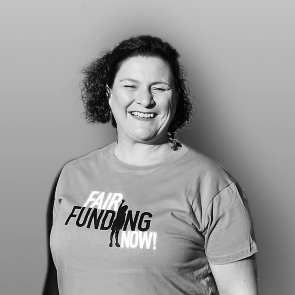 Tracey Hopgood became an active member of the school council a few years ago when she realised that as a parent, she wasn’t always aware of everything going on.

“I found being on the school council eye-opening. It taught me a lot more about how schools run, how they have to deal with their budget and where money comes from.

“Then, around the middle of last year, a representative from the teachers’ union came along and explained they were going to Canberra to rally for the Fair Funding Now! campaign. They were looking for parent representatives and I thought, ‘Well, I’m quite interested in that’.

“It was about broadening my understanding of what I could do to help my school, in particular, and hopefully lots of other schools. I’m not the type of person to sit back and say, ‘I’d like this, can you all sort that out for me?’

“I believe that if you want positive change, you need to be part of that change.

“The crux of the whole campaign – the idea of fair funding – we’re seeing that on the ground. It was hard not to get emotional in Canberra, because Frankston is quite a diverse area with million-dollar houses and commission houses crammed together. So, some schools have tennis courts and inground pools, and others have students without decent shoes, who can’t afford books or excursions, and who haven’t eaten.

“I’m one of many parent representatives on our school council, and I think we have more now than in previous years. While other schools have an enormous amount of luxury, we’re wondering how we can help get breakfast for kids. But we have managed to fund an extra school bus, which makes excursions cheaper.

“My second child is at the end of her schooling now, so any positive change that comes from my activism won’t really affect her. But I know what the schools need, I’ve got a better idea of what the kids need and how fair funding will affect the children coming through. That matters to me.

“I was happy with the results of the recent election in Victoria because the government is spending money in all of the schools, whereas the opposition party was focusing on schools that already have a lot of money. As a parent, that doesn’t make sense. All of our children are important, not just a handful.”