The time is up for the Morrison government

The time is up for the Morrison government

A symbolic morning in Canberra was a powerful reminder of what’s at stake at the next election. The Fair Funding Now! Community’s moment is now upon us. 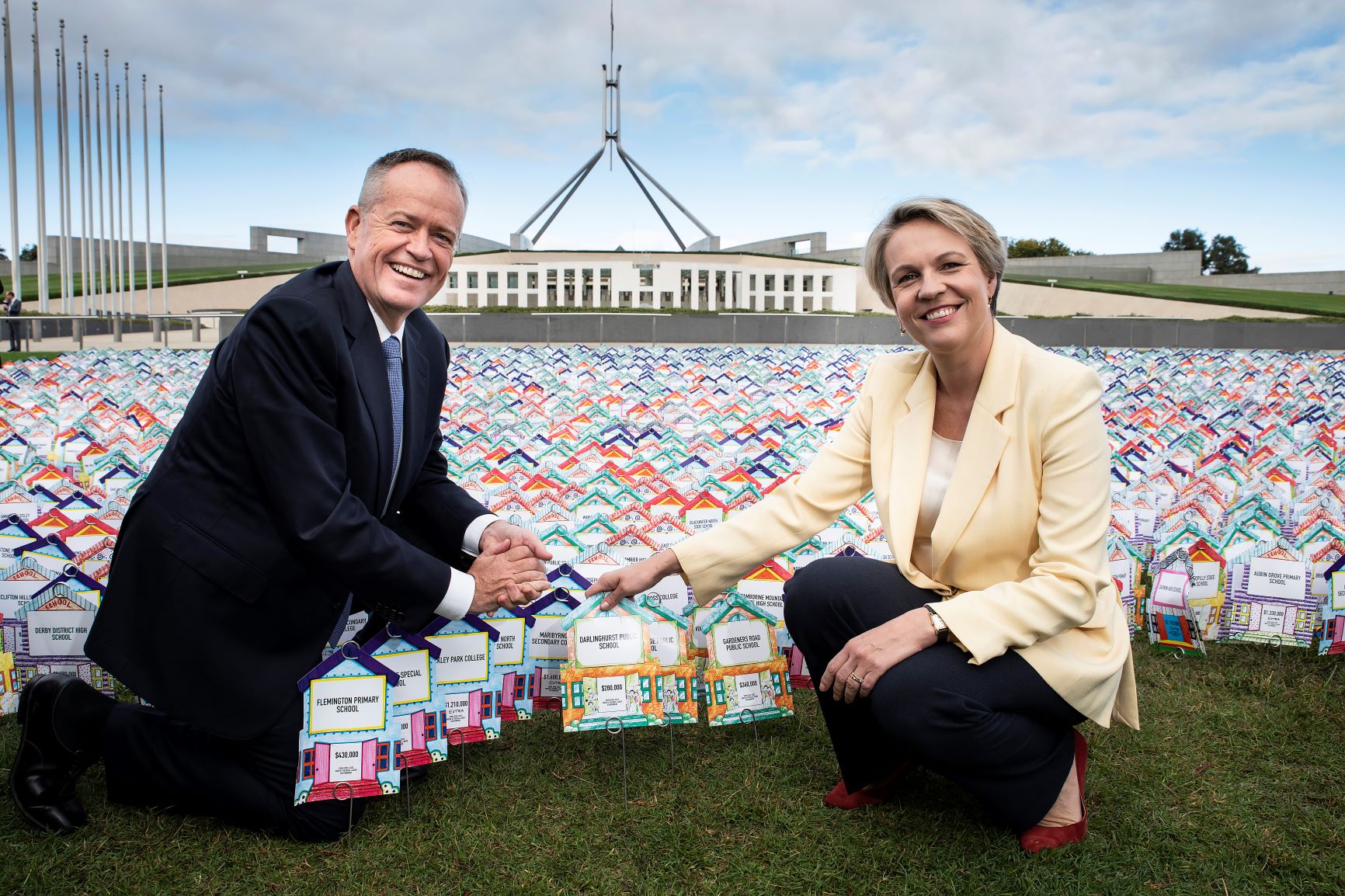 On a crisp Tuesday morning in Canberra, a group of dedicated Fair Funding Now! Supporters from around Australia planted thousands of schools into the lawns in front of Federal Parliament.

Dawn was still some way off, but as our group of volunteers fanned out across the damp grass, their energy and enthusiasm made it clear that there was change in the air.

The Fair Funding Now! Team had a simple message for Federal Parliament: school funding decisions made in Canberra have real impacts on real communities across Australia.

Our schools display was a visual demonstration that every public school has its own unique identity, its own characters, its own culture and its own issues. We wanted to showcase the wonderful diversity in every public school – poets, students from refugee backgrounds, netballers, students with disability, country kids, artists, Aboriginal and Torres Strait Islander students and computer coders – who are all affected when public school funding is cut.

However, there was one thing that every school on that lawn shared. It was the amount of extra funding that each school stands to receive from Labor leader Bill Shorten’s commitment of an extra $3.3 billion for public schools if Labor is elected to government.

Our Parliament House event was an outstanding success on all fronts. There was real acceptance and understanding of our call for fair funding for public schools by the politicians who visit from Labor, the Greens and the independents. I believe that this a key indicator of a real change in public attitudes between this federal election and the last one in 2016.

“It’s the time for every member of the Fair Funding Now! Community to do everything we can to make Labor’s promises a reality on poll day. Don’t wait – contact your local branch to see how you can help Fair Funding Now!” – Correna Haythorpe, AEU federal president

This time the public has a real grasp of what Scott Morrison’s cuts to public-school funding really means for them and their children. They get it. They see his government relentlessly favouring private schools at the expense of public schools, and they don’t like it.

The concept of a ‘fair go’ is intrinsically Australia, and when Australians see or feel that someone is acting unfairly they pull them into line. Scott Morrison’s $14 billion cuts to public school funding fall right into this category, and are shaping as one of the crucial issues that will decide this election.

This is due, in large part, to the endless support, enthusiasm and energy of the Fair Funding Now! Community. You have all done a great job in keeping this issue front of mind and in the public eye. Thanks to you, this really is the ‘education election’.

One thing is for certain. On the day the major parties heard our message loud and clear. And, if the Morrison government didn’t know it was in for fight of its life over the fair funding of public education, it does now.

During the six years of Federal Coalition government there has been no real new investment in public education. Scott Morrison offered nothing to public schools to match the $4.6 billion that handed to private schools last year. He made no attempt to reverse the $14 billion in public school funding cuts he made as Treasurer.

His only Budget announcement was a $30 million local school community fund, which, if evenly split between the three school sectors, means about $1500 for each public school. For the average school that’s not even enough for a new textbook for each student. Compared with the billions of dollars Mr Morrison has handed out in grants to private schools, it’s almost insulting.

The Federal Coalition has been determined to reduce the amount it spends on public schools since the day it took office. The Prime Minister’s idea of a fair go is to cut billions from public schools and hand billions to private schools. These cuts hit hardest the students who need our help the most.

Conversely, Labor’s election platform puts public schools first. Bill Shorten has committed to reversing the Morrison government’s $14 billion in public school funding cuts, and has committed $300 million in extra funding to ensure that students with disability get the support they need at school. This will make a real difference in the push for small class sizes, more one-on-on coaching in the classroom.

The choice is clear for fair funding for public schools. Labor has made this the education election, and that is backed by the Greens and their strong support for public education. It’s time for every member of the Fair Funding Now! Community to do everything we can to make Labor’s promises a reality on poll day. Don’t wait – contact your local branch to see how you can help fair Funding Now! Secure fair funding for public schools.