Federal Education Minister Simon Birmingham has heard from the Fair Funding Now community about the need to restore funding to public schools during a visit to the Northern Territory earlier this week. 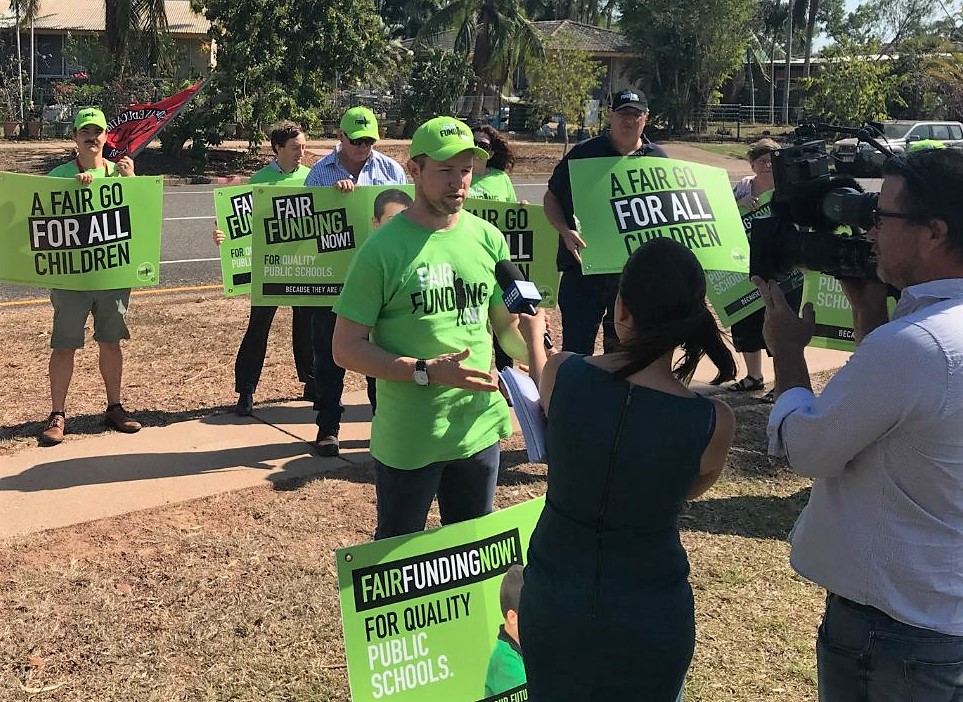 Min. Birmingham visited a school in Darwin only to be greeted by campaigners wearing Fair Funding Now! t-shirts and carrying banners and posters.

The group, led by AEU NT Branch President Jarvis Ryan, told Min. Birmingham he needed to restore the $71 million he had taken from public school funding in the Northern Territory in 2018 and 2019.

Mr Ryan said Min. Birmingham and the public in general need to know of the vital importance this funding would have for public school students in the Northern Territory, particularly those that experience significant disadvantage.

“This event was an important opportunity to highlight how much public school students in the Northern Territory will lose as a result of the Turnbull government’s funding model,” Mr Ryan said.

“This model will lock in disadvantage for the next decade, and we want to ensure that the public understands just how drastic these cuts will be for our students.”

“The Commonwealth’s contribution to the School Resource Standard (SRS) is now capped at 20 percent. However, because the Commonwealth currently funds Northern Territory public schools to 23 per cent of the SRS, these new arrangements will involve a steady decline in funding over the next ten years,” Mr Ryan said.

“These further cuts to disability funding – which is already chronically underfunded – will hurt our most vulnerable students,” Mr Ryan said.

“These cuts should be reversed. The National School Resourcing Board should immediately review the three levels of funding for students with disability to better align them with the actual costs of delivering high quality education, and ensure every child is given the opportunity to learn and meet their potential,” Mr Ryan said.