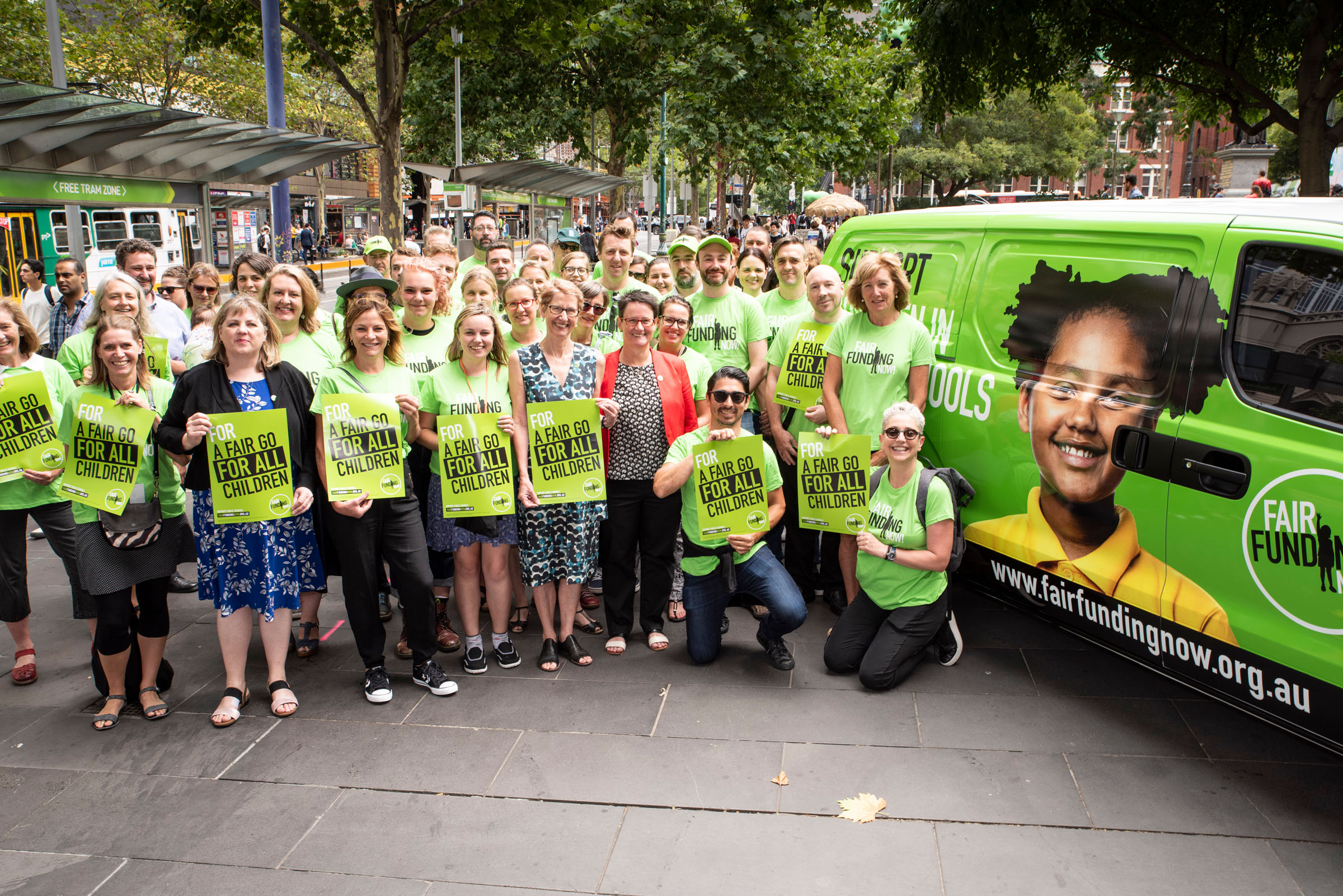 The future of our public school funding will be determined at the ballot box at this year’s federal election. Will the Coalition government’s devastating funding cuts impact on public schools for decades, or can voters be persuaded that a quality education for all students is the priority?

With the election looming, the Fair Funding Now! campaign is at a critical point, says AEU federal president Correna Haythorpe.

The union’s campaign is aimed at restoring public school funding the Coalition government has cut since 2017 and ensuring all public schools are funded to 100% of the Schooling Resource Standard ( SRS).

The legislation set a 20 per cent cap on the Commonwealth contribution to the Schooling Resource Standard (SRS). Then at the end of 2018, says Haythorpe, it “behaved appallingly” by coercing state and territory governments into signing bilateral agreements, with a threat to withhold funding unless they did so.

“It will have a devastating effect on public school funding over the next decade. We’re calling on the government to reverse its cuts and to ensure all public schools are funded to 100 per cent of the SRS.

At the same time the Morrison Governmnet has shown its clear preference for private schools with a $4.6 billion special deal for provate schools and not a single extra cent for public schools.  Almost all private schools will be at or above their SRS by 2023.

“We also want the government to commit to funding capital works in public schools, as recommended in the Gonski review, and to reverse its cuts to funding for students with disabilities and review future funding for these students.”

Campaign on the move

The public response to the government’s attempt to compromise quality education has been overwhelming. The Fair Funding Now! campaign has placed public school funding on the national agenda, ensuring it is a key issue in the election campaign, says Haythorpe.

Educators, parents and others in school communities across Australia have put their hands up to help get the message out before the election, particularly in marginal electorates.

A fleet of branded Fair Funding Now! vans is visiting school communities across the country with campaign teams talking about why we need a government that puts public education first.  The vans  can be tracked on the fairfundingnow.org.au website as they head towards Canberra in the lead up to the Federal election“Its time to remind the government of its responsibility to reverse the cuts to public schools – just as they’ve done with private schools,” notes Haythorpe.

The hard work that AEU members and other volunteers have put into the campaign is paying off. Tens of thousands of supporters have signed up, the media regularly covers the issue, and Labor and the Greens have come to the party with promises to restore the Morrison government’s cuts.

Labor has promised an extra $14.1 billion for public schools over the next 10 years, including $3.3 billion in the first three years.

Importantly, Labor and the Greens have publicly stated the importance that all schools reach 100 per cent of the SRS.

The Greens have also promised public schools $320 million a year, or 80 per cent of the capital grants fund, in a move that would turn around the inequity in capital works funding.

“The public aren’t fooled. Parents understand the importance of investing in our schools,” says Haythorpe. “And they know they have a clear choice when the time comes to vote.”